I still haven’t quite figured out what the hell I am supposed to do with Twitter. I signed up with Twitter a year ago, but because so few people (I knew) used it, I had actually removed the Twitter sidebar extention I had installed on Firefox. But then all of a sudden, just a few weeks ago, people started adding me. Or, as Twitter (and Tumblr) say: “Follow me”. What a strange term to use?

So with the three people who added me just today, I have 16 people following me. Think about it! That is four more than Jesus! But after the first millisecond of exitement, I started to feel the weight of responsibility on my shoulders to actually twitter something insightful! To weigh my words better, to say something profound to my new “diciples”! And at the same time I feel ashamed of my previous Twitterings, like: 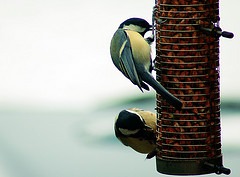 Mr Krick, you are staring at my tits!

See what I mean?

It is a huge responsibility to have Followers. So now I am going through my Twitterings for the last year, the words I muttered to myself in the dark screenlit hours of the night, trying to entertain, well, the notion of someone listening. Trying hard to find something worth keeping, perhaps repeating now for the enlightenment for my 16 FOLLOWERS! But I am hard pressed to find anything worth keeping.

I feel that this is something even Jesus could have said. If he had a newborn daughter, and had just eaten himself silly on roasted lamb at his mother-in-laws house. 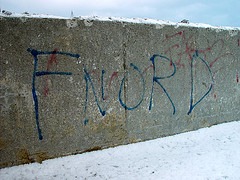 Or perhaps this little gem:

That is pretty clever, and perhaps SHOULD have been said by JC, it sure would have made the bible a little more sensible. But he probably didn’t say it and neighter did I, since it is a quote from the fantastic book Illuminatus.

Besides those two posts, my twitterstream is pretty shallow and, yes, meaningless, and more or less consist of twitterings about movies I was watching at the time, or silly quotes, or different social websites I was testing at the time. Shameful stuff. I have to get my act together.

I wonder if all people who for some reason gets Followers have this problem, trying to take back the funny silly things and fart jokes he probably made in the company of his 12 (haha!) diciples. Perhaps Jesus went into their bags in the middle of the night and stole their notes, perhaps buried the ones he didn’t like in a heap of rubble, like I am considering deleting the most embarrassing moments in my twitterstream now that my colleagues are FOLLOWING me on Twitter 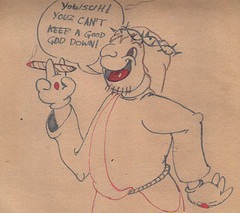 This is something you don’t see in your inbox every day, apparantly Senator Barack Obama is now following me (and 19000 + other people) on Twitter. Now I really must remember to behave. Perhaps I shouldn’t have posted that fake Eleanor Roosevelt quote…

Both Dagbladet and NRKbeta has superb writeup about Twitter, but feel free to read my first test/review of Twitter and why it works so well, apptly titled Why Twitter words / Screw productivity.

Pollution at the Arctic polar circle of Norway 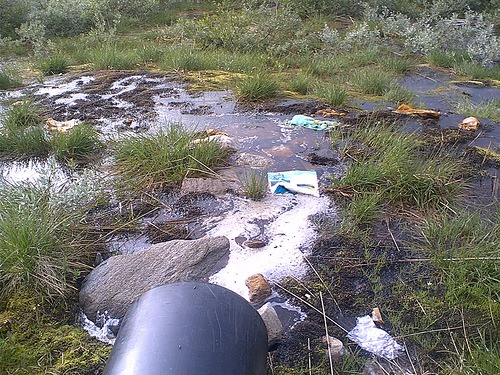 Pollution at the Arctic polar circle of Norway, originally uploaded by mskogly.

This picture is taken at the Polar Centre on Saltfjellet in Norway, a beautiful area on the highlands where a lot of tourists stop on their way the North Cape. Seems like their grey water (etc, possibly sewage) is poured out into this vulnerable landscape just 30 meters from the entrance to the Polar Centre. Makes me embarrassed to be Norwegian.

Twitter is a young shoutbox solution, great for emptying you mind and generally shouting in the forest. I went to look at it when it launched and my initial reaction was pure horror, but I checked back in today and signed up. The Public Timeline is still pure mayhem, but it sure is cute mayhem, and quite entertaining for a minute or two, and who could ask more from random encounters with online strangers?

The mind is a terrible thing to waste … on thinking

But now over to what make it work for me (and I guess everyone else):

Twitter is great for emptying your mind when no one else is online. Like right now, when most people are celebrating Easter, and the rest of the family is sleeping, and I have a thought about anything that would be nice to share, you can just post it (I use the firefox sidebar plugin) and be done with it, and go back to doing whatever. I don’t have to check MSN Messenger to see if anyone is online, and pester them with random rants, I can just dump it on Twitter, and I someone reads it, great, if someone likes it, wonderful, but if not, who cares!

I also use their little Flash Badge to include it on my blog, in case someone is foolish enough to want to read it, if not, it looks great, it works better than a picture and some boring bio.

Screw productivity, let’s have fun! That said, I have been trying some tricks to help myself focus better the last few months, like working more from home to avoid some of the distractions. According to The Twitter Curve article Twitter is just another distraction, and a pretty big one. Well, perhaps, but only if you actually read what other people write (but who would, that is just crazy, stop it! :)). But since one of the tricks in Getting Things Done is emptying you head, Twitter has great potential. Instead of writing a todo about some idea you have for an article, or talking up a storm on IM, you can simply purge yourself on Twitter. Think of it as meditation, acknowledge that the thought is there, write it down, and move on. Because if the thought was really important, it will come back to you later anyway, or you can find it on Twitter.com.

(PS: I only twittered once while writing this post.)

(PPSS: Ok, so I twittered twice while writing this post.)

You can also read my “one year post”, it is a commentary titled : I have … followers?