Came across these in Berlin, seems to be a global fanbased viral for the BBC series Sherlock.
Facebook: I Believe In Sherlock Holmes/Moriarty Is Real
Know your meme: I believe in Sherlock Holmes

Boing Boing: Napoleon Dyanamite action figures on the way: “Torn from the vaunted html pages of The Hollywood Reporter: 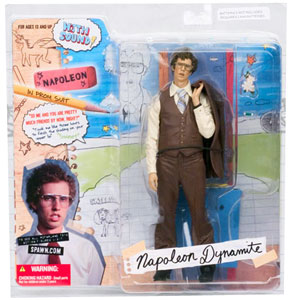 Twentieth Century Fox Licensing & Merchandising and McFarlane Toys announced a new licensing agreement to develop a line of action figures based on characters from the hit movie ‘Napoleon Dynamite.’ The toy line, which will hit store shelves in the fall, will feature characters Napoleon, Pedro and Kip. ‘Napoleon Dynamite and action figure may seem like an oxymoron, but McFarlane Toys has the appreciation and understanding of this character and the film to create some truly fun and highly appealing toys,’ said Peter Byrne, executive vp licensing at Fox Licensing & Merchandising. “