Make it and hang it in your garden, and watch it blink away happily when the wind blows. Check out photos and video from the build.

Update! My heroes over at the MAKE: Blog picked up this little project. I am so proud right now.

Another Update, 7th of February 2009: Plugged on the Japanese version av Make Zine + I believe a reworked version of this tutorial is getting printed in the next issue og Make Magazine, not sure yet… 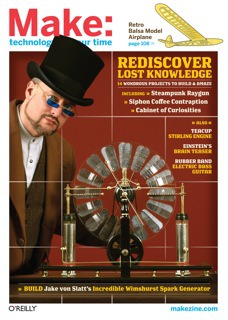 Yet another update: Make Magazine wanted to print a short version of this tutorial in their real, physical edition (I even got paid, woot! How cool is that!). Here is how it looks in their online edition!

I read about a lovely project yesterday on Inhabitat, where a team of Japanese guys (and girls?) created some lovely solarpowered lights. When hung in trees, these lights only came on if there was wind (and dark enough, I suppose).

Some specs, in Japanese http://www.livingworld.net/essays/windlit2001-2/lang-pref/ja/.

I didn’t have what I needed to make a solar powered version, but I did make one powered by a button cell battery instead.

My version is very bare bones and not as techy and beautiful as the “original“, but it works, and is hanging in my garden right now, blinking away happily. Check out photos and video from the build below… 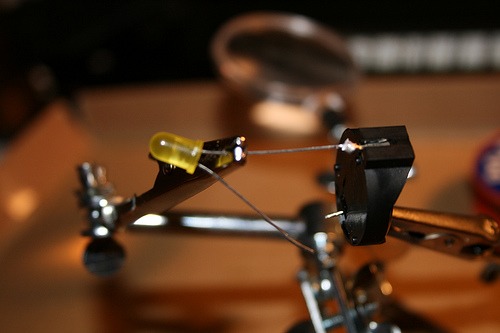 Step one, soldering an LED to the battery holder.

I got the battery holder for the flat 3v button cell battery from an old pc I have been scavenging parts from. It is the battery that powers the internal clock of the PC, and I guess every pc has one. You don’t need a battery holder at all, you could just use tape to attach on of the feet to the LED, but a battery holder makes things a little easier.

Remember to test the LED so you know you attach the correct leg to the right side of the battery.

I used solder and a soldering iron, but tape works fine. 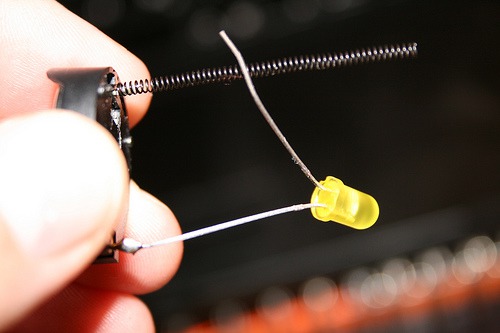 The nest step is to solder something flexible to the other side of the battery. I happened to have a long thin spring from a cd-rom drive for an IBM Thinkpad I took apart a while back, it it works great. Another option could be a thin copper thread/wire, as thin as possible.

I will attach a feather to this spring later, so that when the feather moves in the wind, it also pulls on the spring which touches the foot of the LED, and closes the circuit = blinking! 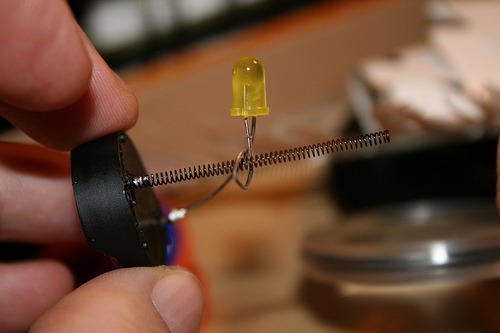 Here I have bent the foot of the LED around the spring. None of the metal parts touches until the spring gets some action later. 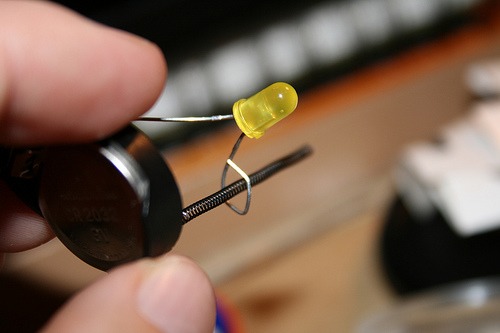 Another shot of the LED. This is actually all you have to do in this project. Pull on the tip of the spring and let go, and your LED will blink like crazy. 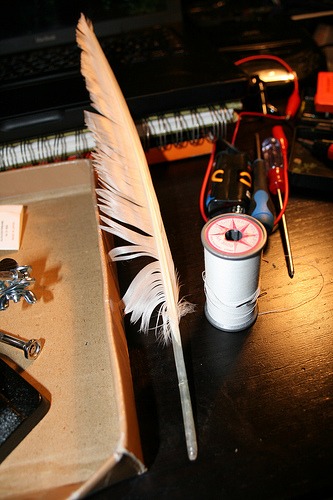 I have a thing for feathers, always have. For the next step you need needle and thread, and a feather. You could also cut out a long piece of paper or (god forbid) plastic. It would work just as well. As long the wind has something to grab on to.

Write something really deep on the paper, like “Satori” or … “Paris Hilton”. 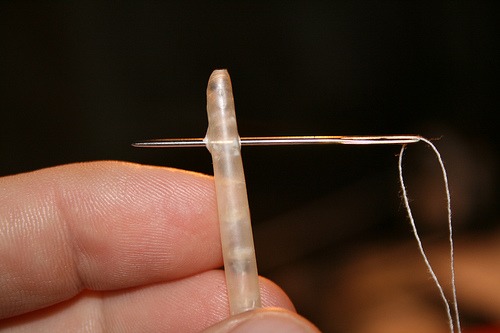 Thread you needle, put the thread double, and put it through the fat end of your feather, or whatever you decide to use. 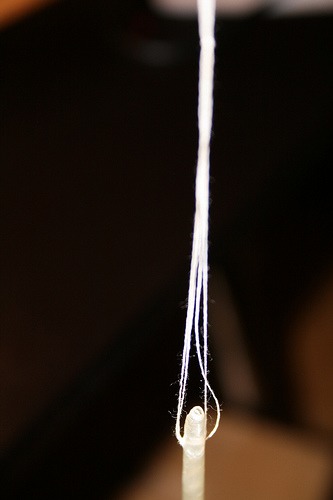 All holed up and ready to party. 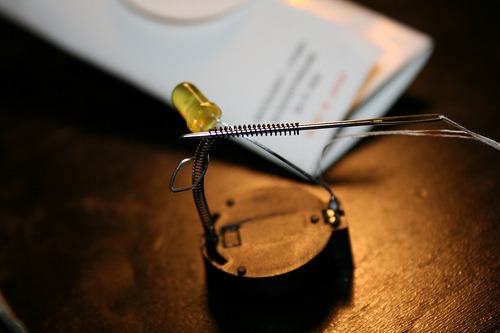 While you’re at it, put the needle through the spring as well. 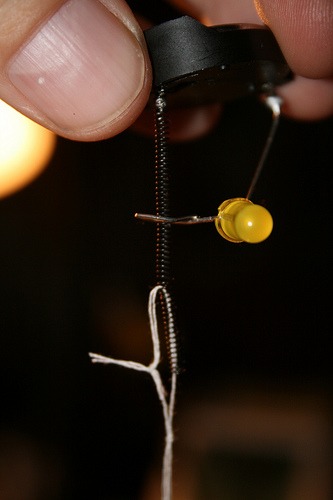 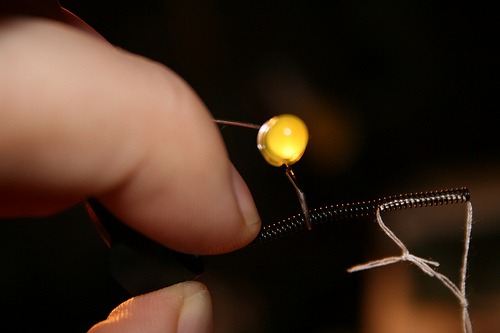 Testing on two three. Push the spring so it touches the little loop on the leg of the LED. There is light, whooohooo!

Now run around like a monkey to simulate how it might behave in real wind. Or go outside and test it. (I did the monkey thing) 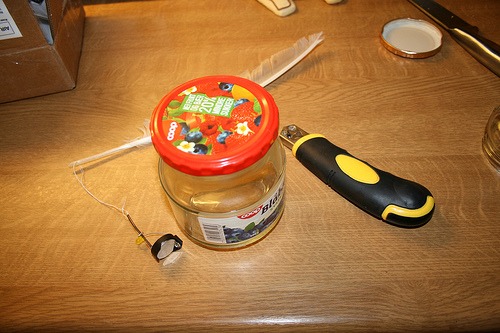 The rest of this project is optional, and consists of making a weatherproof housing for the windtrigger and battery. You may skip it, or make up your own version (I wasn’t very happy with my own solution).

I have been meaning to make a cute little lantern to hold tea candles to put in the trees in our garden, but haven’t gotten around to it. The plan was to use jam glasses and wire of some sort to make a harness for the glass.

Now I get a chance to figure out how. The only change I have to do is to flip the glass upside down, and use the lid to hold the LED and battery in place.

You need:
Glass and lid
Knife
Stiff wire and wirecutters (you could use rope actually…) 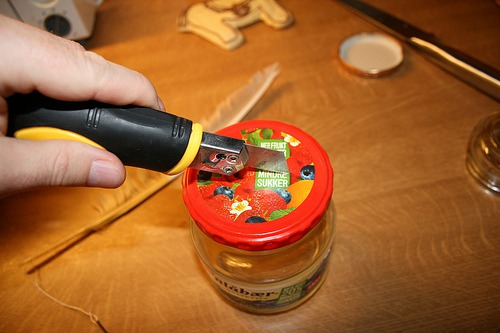 First cut a slit in the lid, from side to side. I actually wanted to cut a circular hole instead, and build some sort of holder to suspend the led in the center of the glass (like a light bulb), but I was getting impatient. I think I will improve on this patent later, and perhaps add some more nifty electronics, like a solar cell or light sensitive noise generator!) 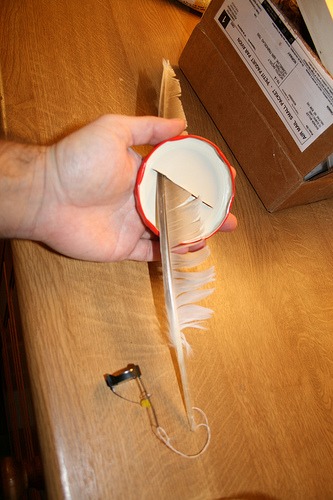 Stuff your feather and wind trigge through the slit in the lid. 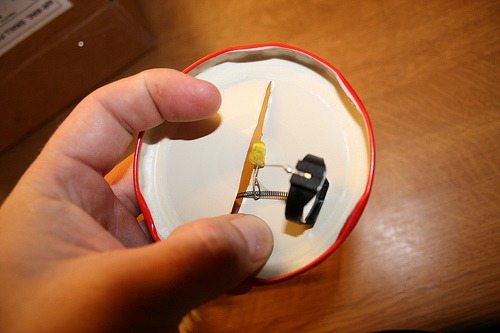 Now this is where I understood that my initial idea was flawed. The LED and at least part of the wind trigger will have to be out in the open, exposed to the weather. FAIL! But it will do for now. 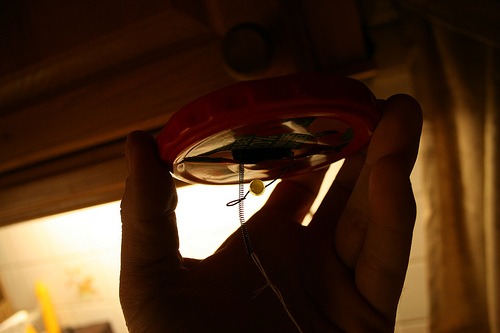 Adjusting things a little, making sure the trigger is still working. 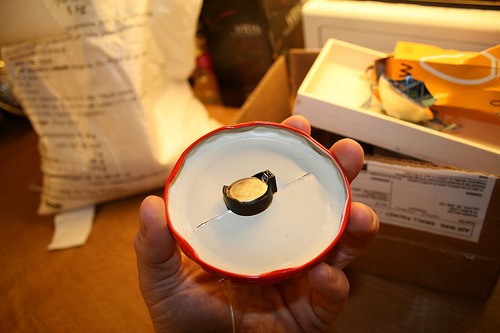 Kind of neat. Easy to get access to the battery holder if I need to change batteries. 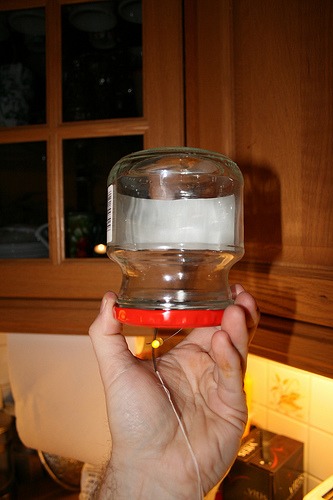 Lots of space left in the glass for other stuff. Notice that I didn’t even bother taking the label off the glass. Shame on me! If God lives in the details, then he has had nothing to do with this solution. 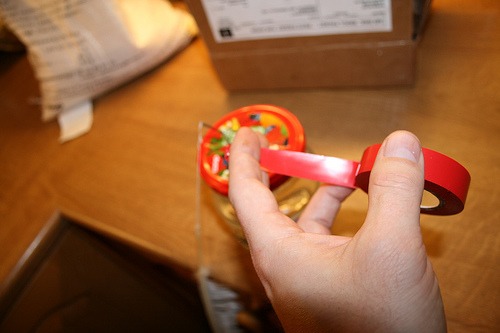 Close up the slit in the lid a little with some tape if you want to. Electrical tape sucks ass, but thats all I had. 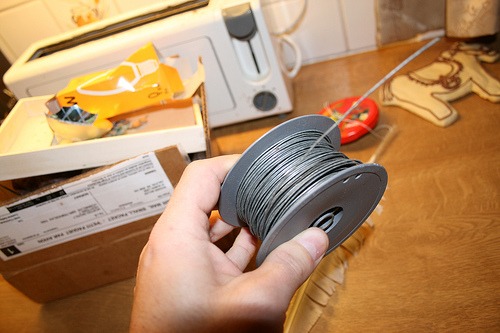 I have had this roll of wire forever, never really had much use for it until now. It is about a milimeter thick, stiff, but soft enough to bend and tie with my fingers. 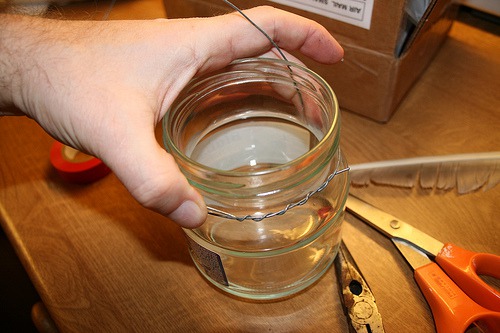 I cut off two pieces, each about two feet or so long. The reason for this is that I want to use each to form both half a revolution around the glass, and then go up to form the handle. I tried putting in piece of wire all the way around the glass, but then the wires i tried to attach to use as a handle just kept sliding, There was nothing holding them in place 180 degrees opposite each other.

Just eyeball the middle of the glass, and then make a loop on one end of the wire as I have done on this picture (on the thumbs side) and then fold the wire on the other side to point up. 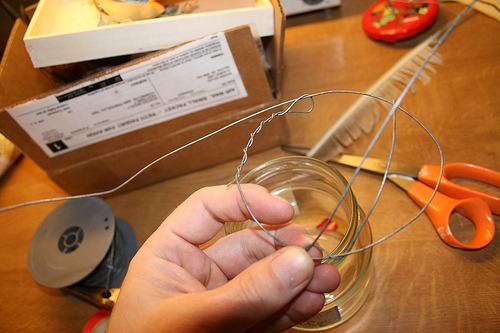 I then took the other string and made the other half, kind of exacly opposite of the first piece of wire. 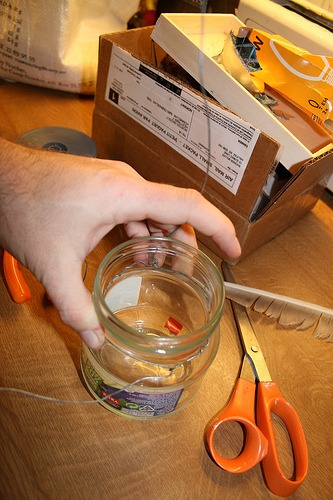 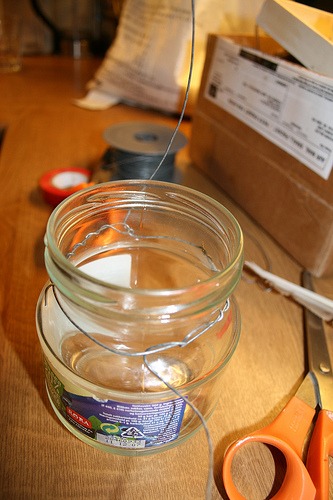 I decided to wrap the wire that is about to go up to form the handle around itself once to prevent it from slipping loose. 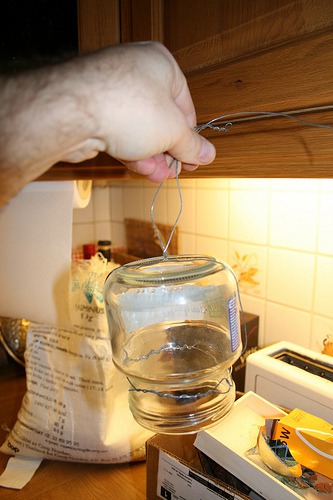 Turn the glass jar on its head, stretch the wire as hard as you can, but not too hard, the wire might snap). Twitch the wires around a few times, then to the same on the end of each wire to complete the handle.

Viola! Screw on the lid with your wind trigger, hold the jar up, and do the final adjustments to asure that the spring and the LED only touches when the feather moves (as opposed to all the time).

Now, go forth and hang your led light in a windy location, download a text on morse code, and try to see it the wind is saying something that makes sense.

If this had been for a tea candle holder I would have flipped the handle the other way of course. 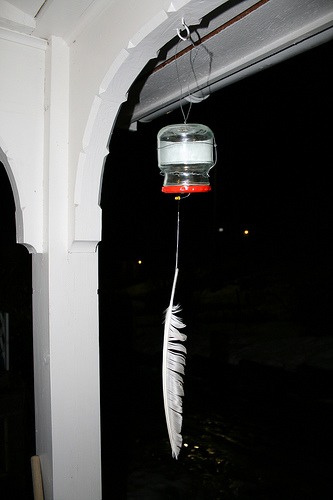 Testing the Wind triggered LED lantern outside. I hate the look of the jar on top, that thing will have to be remade! I think a solar version, and using beeswax to build a house for it will look beautiful. 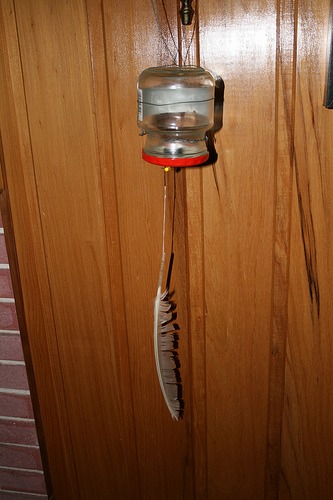 The finished thing, after being outside blinking for four hours. Still works really well. With some fine tuning it even triggers now and then from the air circulation naturally in the house. And crapola, I REALLY do need to replace that jar with something prettier.