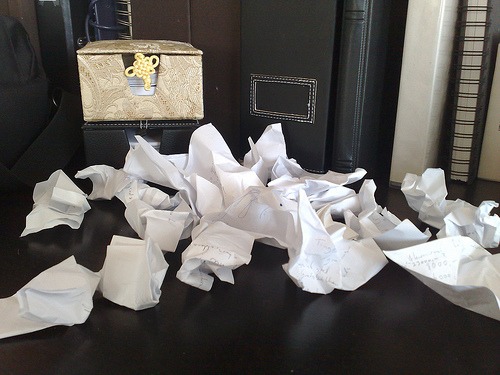 What defines whether an idea is good or not? Which one is realized, which one dies? Ideas are plentyful, but time is limited. So how does one choose what to focus on?

How about leaving it to chance.

My son Leo (4 years old) decided to go through my idea-box (the golden box in the picture above) and do some heavy handed editing! Each note in the box has one idea written down on it.

Here are some of the ideas he crumpled with his teeny tiny hands:

1. A 100-mile gallery, inspired by the 100 mile diet, to only display works from artists living within a 100 mile radius. I thought it was a great idea, but the toddler does not agree. I also like the idea of the 100 mile suit, as a concept for a local clothing store. Perhaps one could put all three together?

2. Falu-korv shaped like the Batman symbol. I was sure this would be an instant hit with the kids! Oh well.

3. A magnetic dinner plate for children. By placing a powerful magnet underneath the table it is harder for a child to up-end it, or even move it. If you have children you know why this would be a great idea! Edit 31.05.2018: Let’s google “magnetic dinner plate” ten years later. It is a thing!

4. Thing library. A very old idea of mine, that has been implemented in many libraries all over the world, but I still want to create a local one. I had a web based personal thing library for a while, it is still online, but not really updated. Edit 31.05.2018: The city of Trondheim got it’s first library of things in 2017.

5. An anthology of poetry, short stories and images with an “Outdoors” theme. You know, nature. Working title: “Outside”.

6. A website for giving yourself carbon credits and a better environmental conscience. There are plenty of carbon calculators out there, but they all seem to focus on how much you suck. I want to create one that shows how good you are. Actions that gives you free carbon credits are borrowing things from friends or libraries, recycling, not buying something new when you could or wanted to, buying something used instead of new, buying something green instead of not, buying something local instead of imported, doing nothing at all, using energy saving appliances instead, etc. You could still buy carbon credits if you absolutely wanted to, but is is far better if you give them to yourself as a reward for being green. Perhaps you could even sell them, or simply give them to a friend who has to travel somewhere. Edit 31.05.2018: Last year I started on a spreadsheet with numbers for different tasks. Did you know that if you DON’t order a Koala from Australia, you will save around 4 metric tons of CO2e? :)

7. A permanent flea market in my area. There are a few overpriced second hand stores in my city, and a few one-day flea markets, but there should be something more permanent, like in Amsterdam, New York or London, a big thriving mess of a market where people could sell or swap their stuff.

9. A way to make a “Hotweels track” for my kids using recycled materials. My kids love playing with them, but they are super expensive and not environmentally friendly to make, but if there was a locally prodused and cheaper alternative created with recycled materials I would buy 50 meters and let the kids go wild. No reason why it is should be so expensive, its just plastic!

10. Hiring myself out to people who need to develop new ideas.

So what to you think, do you agree with Leo that these ideas should be “canned”?

Update, 7th of february 2009: This photo is published under a Creative Commons Attribution lisence on flickr (as are all my pictures). It was recently used by communicatrix.com as illustration. Respect! :)