This how-to takes you through the steps you need to hook your Rock Band guitar controller up to a real guitar. And, of course, to a pair of boxing-gloves.

Does the plastic guitar controller of Rock band and Guitar Hero make you feel silly? Wouldn’t you rather play the Harmonix games with a REAL guitar? Of course you do! And how about getting punched in the shoulder with boxing gloves as you play, just to make it all more interesting?

Norwegian audio but the end where we play this monster is worth watching.

What you need:  A real guitar 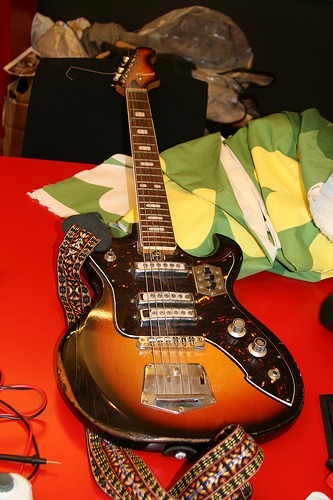 A Kawaii. I swapped this for a Thin Lizzy LP back in the 90’s.

What you need: Xbox360 og Rockband 2 or DJ Hero 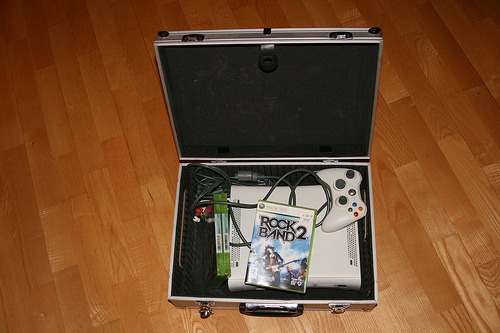 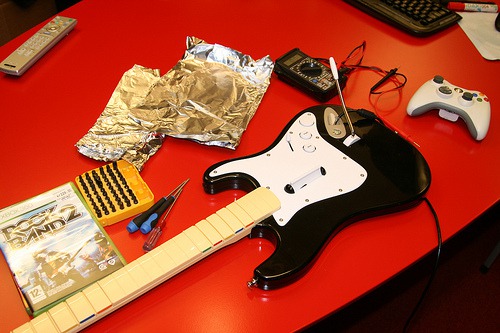 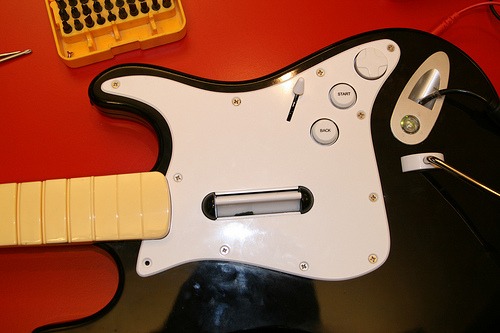 (Excuse the obvious for those who have played Rock Band before: The white long thingy in the middle of this pictures is pressed to “strum” the guitar, and you also have to press down one or more buttons on the neck of the guitar controller at the same time.

Fun, but it really doesn’t feel very Rock’n’roll! Playing with a plastic guitar feels a litle like standing on Times Square wearing a diaper and making infant sounds :) 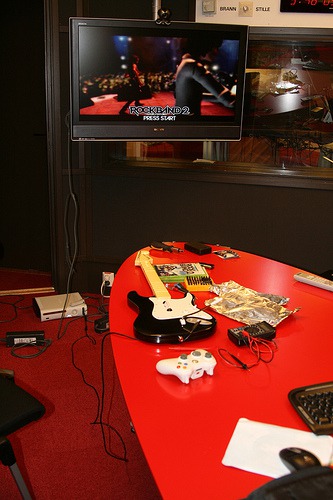 I must admit that this is the first time I’ve ever played Rock Band, so before I start modding the controller I have to play a little. I’m testing Easy and Medium, and it’s a brease really. 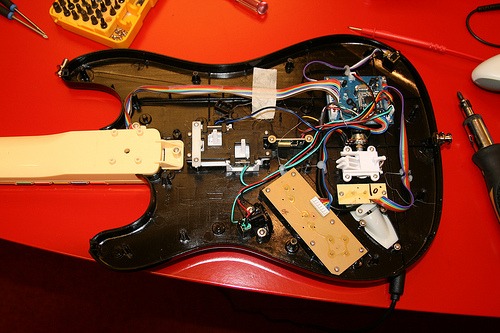 I love the sight of dissassembled hardware in the morning. 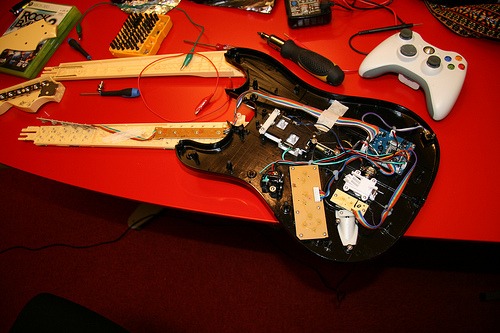 Time to do some modding! 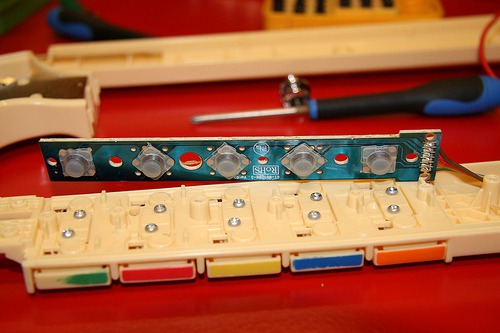 This is how the five buttons on the top of the neck are wired. 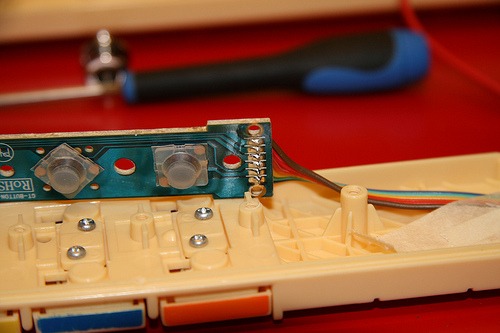 The soldering points are easy to reach but quite close together, so I have to solder some wires to each of them. The brown wire at the top is for the green button, and the blue wire at the bottom is ground.

My plan is to connect ground to the strings of the real guitar. Because the frets, the bridge and the mounts for the guitar strings are all made of metal, all the strings on the guitar becomes electrified when I run a wire from ground (the bottom solder blob on this picture) and to one of the strings.

My next step is to make improvised contacts using tin foil for each of the fingers on my left hand. When I touch the strings on my (real) guitar with one or more of my fingers, it will close the circuit, and it will be like I pressed for instance the green button on the neck of the guitar controller. Good idea? Who knows! But that’s the plan.

There are five buttons on the original Rock Band controller, so if I want to play on Expert I have to run a wire to my thumb as well. That will be rather awkward. 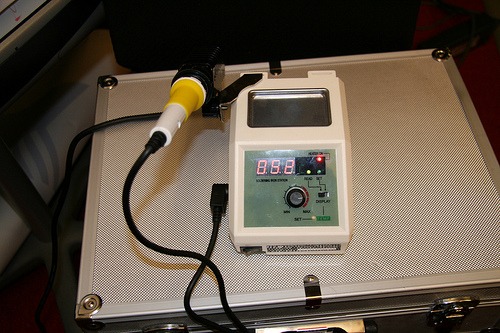 Do you have a girlfriend that gives you a soldering station for christmas? Recommended. 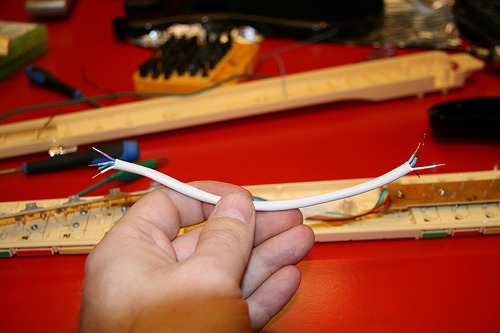 I got a tip that you can strip telephone cables to get a good suply of solid core wires, a must if you’re into diy elektronics. I’m trying to pick wires with colors that match the buttons on the guitar, just to make it a little easier later to hook up strange things to them.

Finished soldering, and hooked up to the guitar 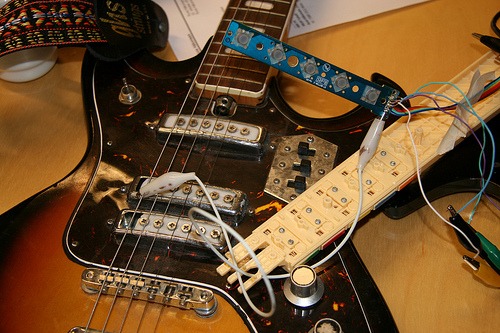 The reason I soldered the wires to the circuit board is just to make it easier to connect alligator clips to them later. You can see them spaghettying out on the right side of the picture. If you are making a more permanent modification you could perhaps do it differently, but this works best for me. If you want to I can now drill a small hole in the neck and screw the neck back together again, and still have easy access to connect things to the wires.

The white alligator clip in the above images runs from ground on the circuit boar to one of my guitar strings, but I will move it down to the metal bridge later I think, leaving all 6 strings free to be played with a pick.

If I now take one of the other wires, for instance the green wire, and hold it to one of the guitar strings, it will be as of I presssed the green button on the controller. And it works! 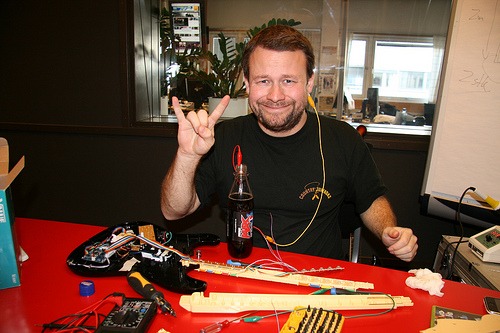 Hurts like hell, but as Data learned in Star Trek 9 – Insurrection: It’s important to have a little fun every day. 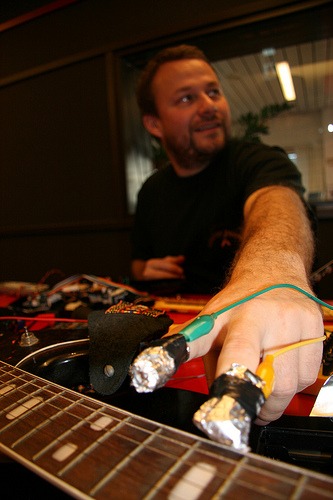 First test of my tinfoil contacts, with wired running to the green and yellow button (hurray for alligator clips with matching color). Works like a charm!

The drawback of using finger contacts it that my finger dexterity is a little reduced, and I usually hit more than one wire at a time. But I will still be able to plugin the guitar into my amp, crank it up and play some power cords on the guitar and play Rock Band at the same time. I can pick notes from anywhere on the neck, it doesn’t really matter where as long as I touch the right finger to the string(s) at the correct time.

The tin foil looks ridiculous of course, but I am sure that it is possible to make a version of this that is cooler looking and easier to play with. The electrical connection between the tin foil and the strings on the guitar is excellent, so I am now certain that this will work. Later I will try to create finger contacts that are little bit more “slim fit”.  (Tip me in the comment section if you have ideas).

Householdhacker connected wires to a guitar pick in their hack, and that was what I wanted to try as well, but then I had this other idea: To swap out the guitar pick with boxing gloves!

Connection the wires for the boxing glove 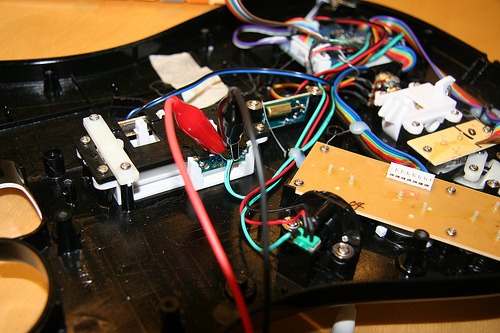 The boxing glove will replace the white plastic knob used for strumming the guitar on the xbox360-controller, and all I need to do is to clip on a red and black alligator clip to the small circuitboard as shown in the picture, and voila! 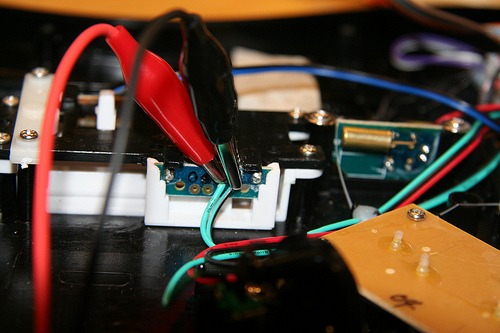 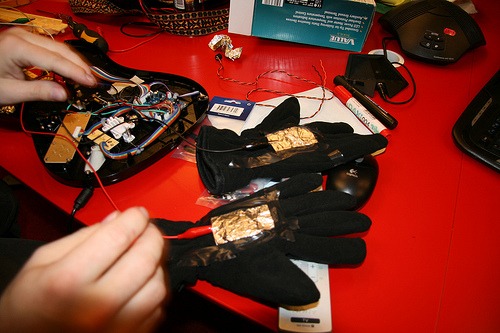 So the plan is to use gloves (prefferably boxing gloves) to control the strumming. I don’t have access to boxing cloves right now so I’m testing with some plain vanilla gloves for the time being. When testing I’m taping pieces of tin foil to the palm of each glove and running a wire to each. 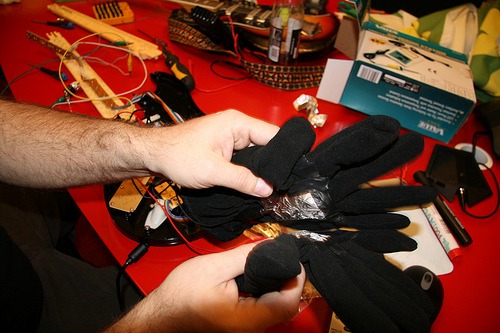 It seems to be working, nice sounds are comming from the TV, but it’s a bitch to test everything by myself. This is definitely a controller that demands two players! 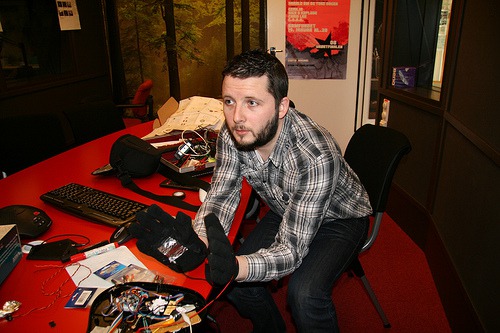 I push the buttons by pressing my fingers to the strings, while Lars claps his hans together in rythm.

And we have a winner! We are amazed that it is so easy to play together, and the presicion of both the gloves and the guitar are simply amazing. I started this as a novelty trick, but I now realize you can actually play Rock Band on this thing! So cool!

And you feel a little bit more macho with a real guitar! 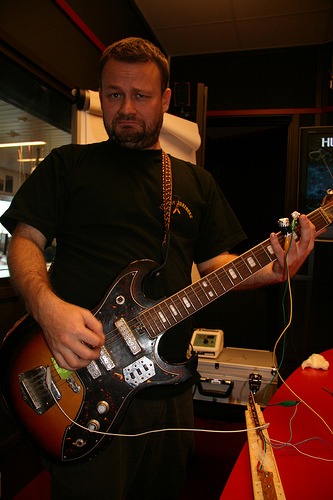 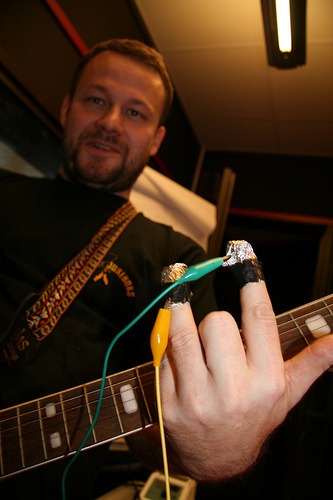 Wassup! Ok, so wearing tin foil on each finger might subtract slightly from my cool rocker image. But it works!

Re-evaluation of the glove controller 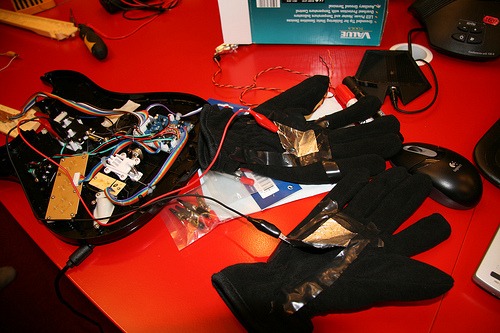 The fun part about making things yourself is to learn from experience and try to improve. The most important thing I learnt  (besided that tin foil makes you look slightly dorky)was that tin foil is pretty vulnerable to tear. But if I fold it several times, especially on the end that I clip the alligators to, and tape the wires to the glove as well, the tinfoil lasts a lot longer. It is really easy to get carried away then playing, so it is a must to find a way to hold the wires in place and prevent unneccesary strain if possible. 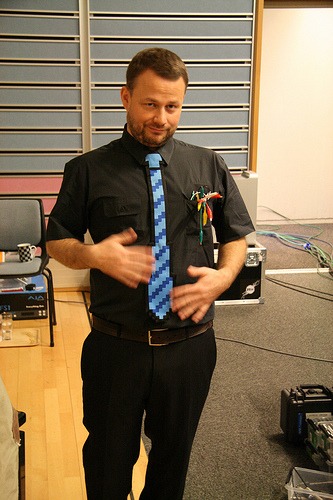 I’m building this controller for a Norwegian television program called Tekno, and that means I have to dress up a little before recording! 8-bit tie bought from Thinkgeek many years ago. I knew I would get to use it sometime. :)

Testing all connections in the television studio 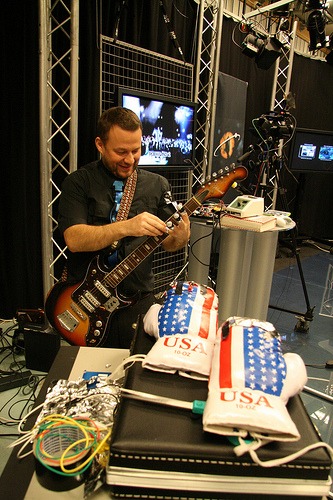 Boxing gloves prepped and ready to rock! I’ve taped tin foil to the front of the gloves. When recording the tv show we will only use one of the gloves but it’s easy to make a solution where you can use both gloves.

The tin foil is folded several times to make it more sturdy and after connecting the alligator clips I will tape them to the gloves as well.

My colleague Rune trying on the gloves 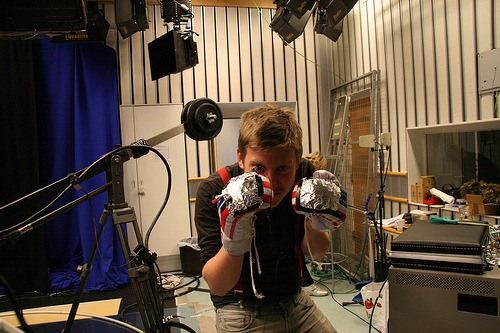 Testing the instrument with  Rune 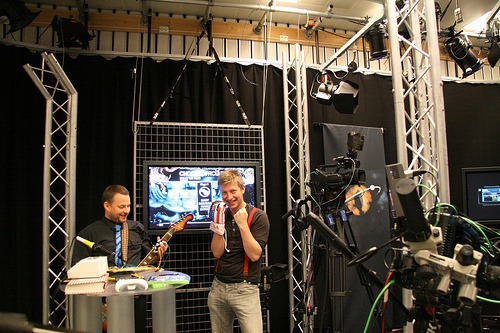 The showhost Hanne helps me to attach the shoulder contact 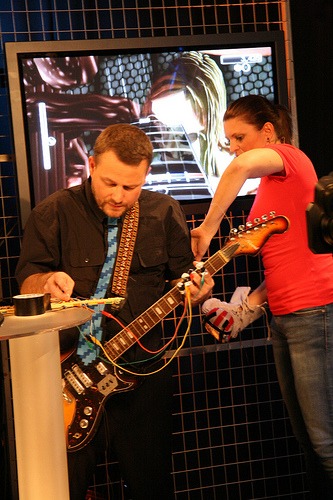 I’ve created a contact made of tin foil and Hanne is helping me tape it to my arm. When we play she will punch me in rythm to the game. There is a wire running from the shoulder contact to ground on the Rock band guitar controller, and another wire from the glove and to positive on the xbox controller. (see previous steps for details).

When Hanne punches me in the shoulder the glove contact connects with the shoulder contact, and power flows through.

Testing Rockband with a boxing glove and a homemade controller 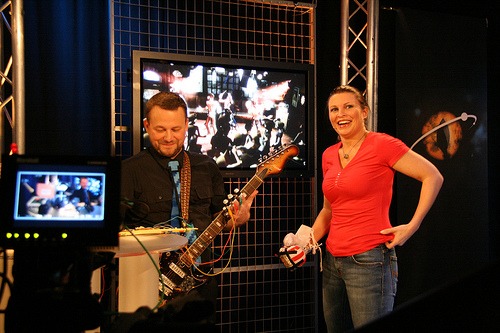 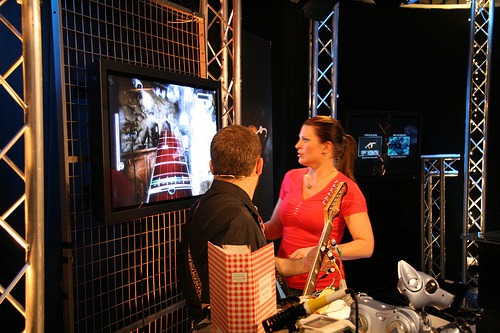 Update! Thanks to Joystiq for picking this up and writing such a funny article on their excellent site!